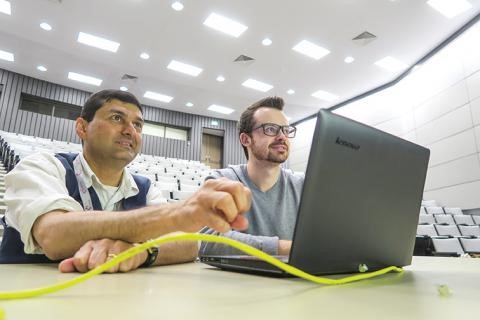 Our research centre is the leading world expert in diagnostic development in motion biomechanics for Parkinson and related movement disorders, in collaboration with the Department of Computer Sciences, Engineering, Surgery, and CSTAR Robotics. These projects include:

In addition, our clinic participates in many national and international clinical trials of new and innovative treatments for movement disorders. We are also developing new state-of-the-art projects including intraoperative implantable multichannel probes, an interactive teaching website for movement disorders, and commercializing medical devices for improving the patient's quality of life. Our diagnostic startup MDDT Inc, co-founded with Jack Lee, is commercializing educational and medical devices for the North American and European markets.

Our research into movement disorders can be further categorized into these diseases:

Parkinson Disease (PD) is a progressive neurodegenerative disorder affecting over 100,000 Canadians. Most PD cases are idiopathic, yet some genetic mutations have been identified. This disease occurs more commonly in the elderly population, and the causes remain largely unknown. Neurological pathology associated with PD includes the loss of dopamine-producing cells in the substantia nigra and the formation of Lewy bodies in neurons, due to the accumulation of alpha-synuclein protein. Insufficient basal ganglia activity (from lack of dopamine) often manifests as motor symptoms in the early stages of the disease. The complexity of PD means that each patient may experience a unique selection of symptoms, but some common symptoms include tremor, slowed movement, the rigidity of the limbs or body and balance trouble. In later stages of the disease, other symptoms may arise, such as thinking and behavioral deficits as well as problems relating to sleep, posture, sensation, and emotion. While there is currently no cure for this disease, the search for effective treatments is an active area of research including DBS, drug pump therapy, oral medication, and new surgical procedures our is exploring.

Essential Tremor (ET) is one of the most common movement disorders, with the primary symptom being uncontrollable shaking. The cause of ET is currently unknown, however, heredity plays a large role. Although ET can occur at any age, it most often occurs after the age of 40. It is not a terminal disease but it can become debilitating with increasing severity of tremors, which are most often found in the hands during voluntary movement. ET may also affect the head, voice, arms and rarely, the lower body. Currently, there is no cure for ET, but treatments exist to alleviate tremors including oral therapy, Deep Brain Stimulation botulinum toxin A (BoNT A) injections. We have a new diagnostic system, TremorTek, being commercialized to improve on existing therapies which we hope shortens the timeline of drug development and enables patients to have access to treatment faster.

Dystonia is a movement disorder characterized by slow repetitive movements or abnormal postures due to involuntary muscle contractions. Depending on the form of dystonia, the disorder may be caused by genetic factors or unknown environmental factors. It can affect only one muscle, a group of muscles or muscles throughout the entire body. Symptoms can include tremors, cramping, muscle spasms and continuous pain, however, symptoms vary with the type of dystonia. Presently, there is no cure for dystonia but there are several treatments available for some of the dystonic symptoms. These treatments include botulinum toxin A (BoNT A), deep brain stimulation, physical therapies and medication such as GABAergic agents, dopaminergic agents, and anticholinergic agents. We have a new diagnostic system, Hinge Diagnostics, for improving the treatment outcomes of existing dystonia drug therapies.